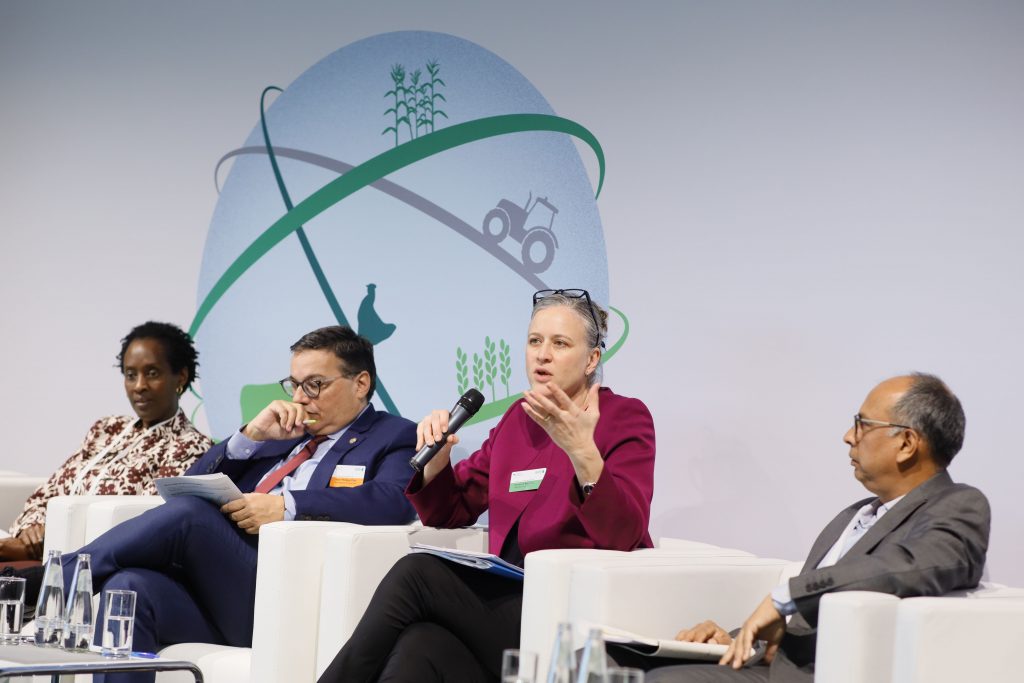 Loraine Ronchi is a Practice Manager for South Asia in the Food and Agriculture Global Practice at the World Bank Group (WBG) where she manages a large team and portfolio in food and agriculture sectors.

Prior to joining South Asia, she led the Global Agribusiness team and was the WBG’s first Global Solutions Lead for Value Chains and Agribusiness. Her focus as Global Lead was on regional cross fertilization and solution creation in the agribusiness space. In her 15 years at the WBG, she has led agriculture programs and policy dialogue on the agricultural sector from both headquarters and country office base in East Africa. She also served as technical lead for agribusiness private sector development in the IFC’s advisory services for three years. As such, her expertise in value chain development spans from farm to fork. Integrating smaller actors into inclusive value chain development has been a key focus since even before joining the WBG, when Loraine worked in the coffee and cocoa sectors in research, impact evaluation, and technical assistance on linking smallholders with private sector coffee and chocolate companies. She holds an MPhil in Economics from Oxford University, and her Ph.D. in Economics is from Sussex University, U.K.


A food technologist with vast experience in SPS, market access and industry agro development. Currently serving as Chief of Party, Land O’Lakes, Kenya. She has worked on policy/regulatory issues as well as on SPS systems in a wide range of food sectors in East and Southern Africa; supporting regulatory agencies and agro processing facilities. Martha was formerly the lead expert on sanitary and sanitary matters with the Common Market for East and Southern Africa (COMESA), bringing her expertise on SPS matters into the COMESA, Tripartite, and continental integration agenda.

A major focus of her role is to ensure SPS regulatory systems are simplified/harmonized to facilitate intra-regional and global trade whilst ensuring the protection of human, plant and animal health from imminent and emerging risks. Privately, she has interests in cattle ranching in Uganda.

Spending his early years on a rubber plantation, Suresh Ellawala has had a close connection with commercial agriculture throughout his life. He has been actively involved in mango cultivation for over 25 years . Living in Sri Lanka, Suresh’s challenge has been to bring new ideas and energy to stimulate export agriculture in a sustainable manner. Suresh is a D irector and CEO of Ellawala Horticulture that in 2003 registered the now widely grown TomEJC mango cultivar in Sri La nka. The variety, named after his father Tom and his Philippine friend Juan Carlos (JC) is now the preferred mango cultivar for commercial cultivation in Sri Lank a with the company engag ing more than 1000 out growers.

Suresh is currently the Chairman of the Lanka Fruit and Vegetable Producers, Processors and Exporters Association (LFVPPEA), which represent s companies with nearly 80% of Sri Lanka’s exports from the sector. Together with assistance from the Standards and Trade Development Facility (STDF) and the International Trade Center (ITC), the association has worked on helping companies improve SPS, good agricultural practices and developing value added exports. He is also actively involved in advocating policy on export agriculture as a member on the Food and Beverage Advisory Committee of the Sri Lanka Export Development Board.

After beginning his career as technical assistant in Africa (Burkina Faso), from 1994 to 1998 he acted as a “chargé de mission” for Agrofood Industries at the Economical Service of the Regional Forest and Agriculture Direction of Picardy region in Amiens, north of France.

He then was Deputy Agricultural Attaché at the French Embassy in Madrid, Spain, and became Responsible for Quality and Food Safety at the General Secretariat for European Affairs of the Prime Minister.

After some time at the General Directorate for Food where he was Deputy Head of the Food Safety Service from 2004 to 2009, he became Director of European and International Affairs at FranceAgriMer (public agency under supervision of the French Ministries for Agriculture and Finances).

From July 2012 to May 2014 Jean-Philippe DOP was Counselor for International Promotion and Quality of the Products at the Delegate Minister for Agrofood Office.

Since May 2014 and until December 2015, he held the post of Deputy Head for European and International Sanitary Affairs at the General Directorate for Food of the French Ministry for Agriculture, Agrofood and Forestry.

He joined the OIE in January 2016 to take over the position of Deputy Director General in charge of Institutional Affairs and Regional Activities.