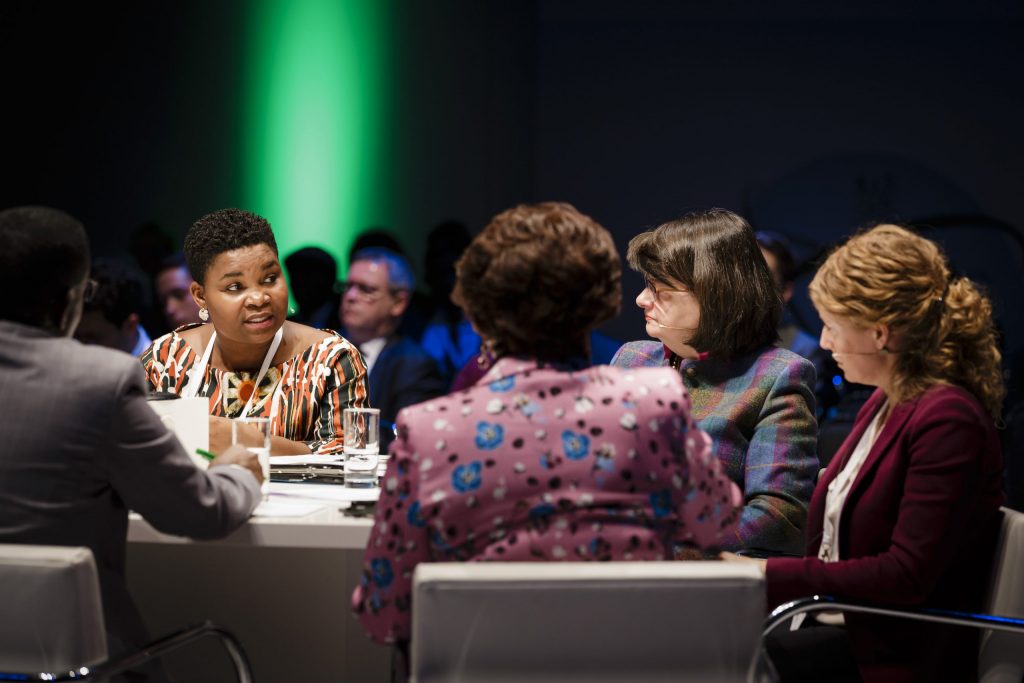 H.E. Madam Josefa Leonel Correia Sacko, an Angolan national, is a leading African Agronomist. She was elected as the new Commissioner for Rural Economy and Agriculture of the African Union Commission in 2017.

Prior to that, She was a Special Adviser to two Ministers in Angola, her home country: the Angolan Minister of Environment where she also served as Ambassador responsible for Climate Change. In the Department of the minister of Agriculture Mme Sacko oversaw Food Security, Eradication of Hunger and Poverty Reduction. The former Secretary General of the Inter African Coffee Organization (IACO) for 13 years in Cote D’Ivoire where she represented Coffee economy for 25 African Coffee producing countries.

During her tenure, she successfully advocated for the empowerment of small scale coffee farmers across the continent by setting up Regional Centres of Excellence for Capacity Building of Member States, on Genetic Material Conservation, Coffee Quality Improvement and Cup Tasting Liquor in Cote d’Ivoire, Uganda, Cameroon and Zambia. Madam Sacko is one of the African Women Africa should be proud of, and she has built up her international profile and reputation by working with Regional, Global Institutional on Agriculture and many other sectors supported by World Trade Organization (WTO), African Union (AU), International Coffee Organization (ICO), African Development Bank (AFDB), African Bank for Export and Import (AFREXIMBANK), (FAO), UNECA, NEPAD etc.

The other notable cooperation/partnerships she has worked with include the Regional Economic Communities (RECS), namely, SADC, COMESA, ECOWAS and EAC, where she has actively participated to address the challenges encountered by small scale farmers in Africa, ensuring that they remain a central focus in regional and national policy making for development. Madam Sacko speaks fluent Portuguese, French, English, Spanish and Lingala.

„The African Continental Free Trade Area (AfCFTA) is a mile stone project that will shape Africa for the next generations. The African continent is setting a clear signal that trade is an instrumental part to foster regional integration.

Maria Flachsbarth, a doctor of veterinary medicine from University of Veterinary Medicine Hanover, became a member of the German Parliament in 2002. Since 2006, she has been deputy chair of the CDU in the state of Lower Saxony, and since 2007, she has chaired the CDU district association for Hanover. From 2002 to 2013, she served on the Parliamentary Committee on the Environment, Nature Conservation and Nuclear Safety. From 2009 to 2013, she chaired a Parliamentary Committee of Inquiry on the envisaged radioactive waste disposal facility at Gorleben, and she was the special representative for churches and religious communities of the CDU/CSU parliamentary group. Then from the end of 2013 to March 2018, she served as Parliamentary State Secretary to the Federal Minister of Food and Agriculture. Since March 2018, she is Parliamentary State Secretary to the Federal Minister for Economic Cooperation and Development.

H.E Mr. Oumer Oba is an Executive Committee member of Prosperity Party in his political career.

H.E Oumer was born from a very well respected ethnic Oromo farmer’s family on September 15, 1972 in the Arsi, region of Ethiopia. He has been exposed to farming at an early age instilling in him the discipline of hard work, the willingness to go the extra miles to get things done and to work with diverse community to solve multitude of problems at the grass root level and beyond.

H.E Oumer has served as Director General of the Ethiopia Revenue and Custom Authority; Vice President of the Oromia Regional Government; Head of the Bureaus of Urban Development and Agriculture with the rank of Vice President of Oromia Regional Government; Deputy Head for Bureau of Finance and Planning; Zone Administrator, Heads of Zone Finance and Planning; Head of Trade and Industry, Head of Culture and Tourism Departments. He started his career as a teacher in Ministry of Education. He has served over 10 sectors in the last 20 years.

In addition he is currently a board member of Development Bank of Ethiopia, Industrial Parks Development Corporation and Agency for Civil Society Organizations.

H.E Oumer received his BA in Economics in Ethiopia and his Master’s in Business Administration in International Business (MBA-IB) from Greenwich University in London.

He and his wife, Mekida Shale Gebewo, are parents of two daughters called Semira and Hawi and two sons called Fraol and Fuad.

„For the first time , AfCFTA will facilitate Africa to trade with itself devoid of barriers associated with movement and reciprocity in standards ensuring distribution of food hence attainment of food security.“

Previously, she served four years as the Regional Women Representative at the EAFF and Treasurer Board Uganda cooperative Alliance (UCA) a member of EAFF.

Elizabeth is a young agriprenuer and has been at the Centre of championing farmer – led Agriculture technology and innovation at the EAFF through the E-Granary initiative that virtually aggregates farmers for input, output and service markets. She is also a passionate cooperator and spearheaded the push to have the regional law on cooperatives – The East Africa Cooperative Societies Bill 2015 through the East Africa Legislative Assembly (EALA). Having contributed to the Africa – EU Alliance – Task Force Rural Africa consultations, she was part of the panel to critique the draft report. Elizabeth has also been at the front in creating awareness on Climate Change in Farmers Organizations and advocating for scaling up of working models – she is part of the Climakers (Global Farmer led climate change agenda). As a result of her efforts, she was recently awarded and Globally recognized by the World Farmers Organization (WFO) as one of the exemplary women leaders in Farmers Organizations’ contributing to sustainable development.

Global Director for the Agriculture and Food
Weltbank

Before taking this position, Martien served for two years as Practice Director of the World Bank’s Agriculture Global Practice, where he oversaw the Bank’s agriculture lending, portfolio and analytic work in the East-Asia Pacific, Latin-America and the Caribbean and South Asia Regions, coordinated collaboration with IFC on agribusiness, and led the Bank’s global engagement on agriculture and climate change.

Martien joined the World Bank in 1993 as a Young Professional and worked initially as an agriculture economist in the Latin-America and Caribbean Region. He was cluster leader covering agriculture during field assignments in Madagascar from 2001-2004 and in India from 2005-2007. From 2007 to 2015 Martien worked as Program Coordinator and Sector Manager for Agriculture in various assignments in the Africa Region, including covering Southern and West-Africa. He was also the Practice Manager for Agriculture in the South-Asia Region, a position he held from 2015-2017. Prior to joining the Bank, Martien was an associate scientist in the Economics Program of the International Maize and Wheat Improvement Center in Mexico from 1991-1993 and an associate expert in the Dutch bilateral cooperation program in Pakistan from 1989-1991.

Carl Heinrich Bruhn is the founder and CEO of Amatheon Agri Holding NV.

Carl, an agronomist by training and an experienced entrepreneur, has been in the agribusiness for more than 25 years. He has gained extensive international and management expertise, e.g., as Head of M&A at Nordmilch or as the Executive Director of Sachsenmilch Group. In 2004, he started his own farm management and bioenergy company before focusing entirely on Amatheon since 2011.